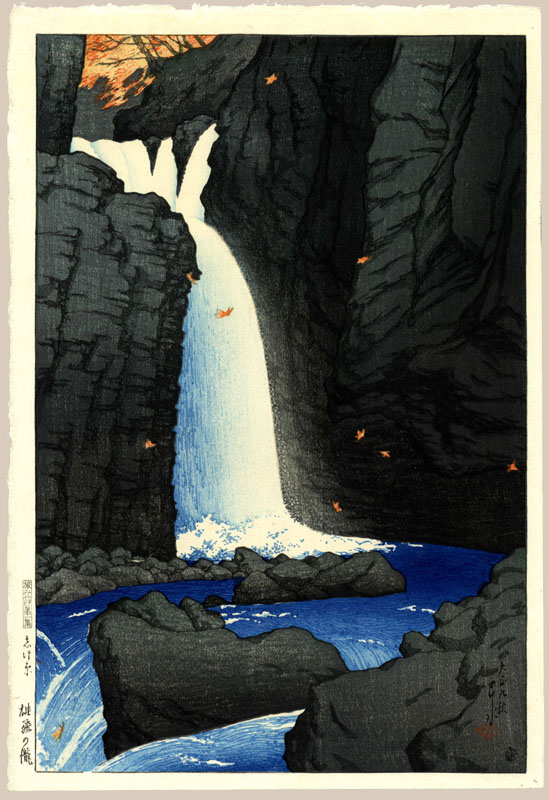 Notes: One of the best extant examples. Pristine colors throughout, with near perfect overall condition and state. An exceedlingly rare pre-earthquake design.

There are about five waterfalls located in the mountains around the Shio spa in Shiobara. This one is especially stunning. The high moss-covered cliffs are connected as if the two sides of a folding screen, and the pool at the base of the waterfall is dark and deep. I think that the terrifying power of the blue-white falls is true to its name, Yuhi-no-taki ['Flying jump falls']. - Hotei, Vol. 1

'Hasui began working on this (Souvenirs of Travel) series in the summer of 1919, and it was completed in the autumn of the following year. Each of the sixteen images of Souvenirs was based on the sketches that Hasui had made during his travels from Sendai to Kanazawa. Hasui apparently enjoyed travelling, particularly when unplanned, and during his lifetime he journeyed extensively throughout Japan. Compared with his first landscapes of Shiobara, this work shows a refinement in Hasui's style, particularly in the use of a more delicate line and a strengthening of the lyrical quality. While Hasui is no doubt indebted to the Ukiyo-e tradition of landscape prints as seen in the works by print designers such as Utagawa Hiroshige, Katsushika Hokusai and Utagawa Kuniyoshi, Hasui has nevertheless developed his own style in the treatment of the overall composition and in the color harmonies. As a result, this series marked an important point in Hasui's evolution as a landscape artist.' - The New Wave; pg. 142