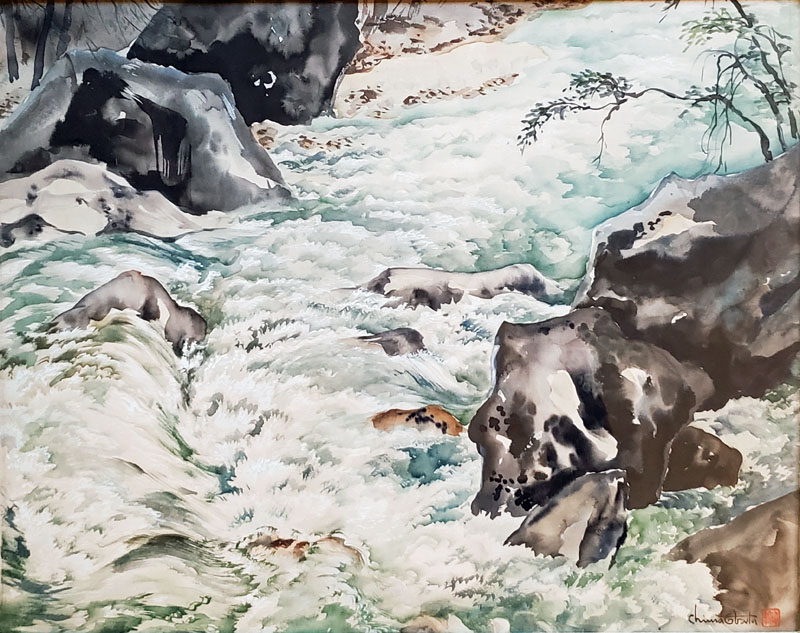 Notes: Signed and sealed by the artist. Presented in the original Oakland Museum Chiura Obata Exhibition frame/matte. Provenance: From a California collector and ex-student, who purchased the painting directly from the artist. Loaned to the Oakland Museum for inclusion in the, Chiura Obata Exhibition May 19 - July 20, 1977. The location is confirmed by a Obata family member; as sketches of the Merced River Rapids are in the family archives.

Happy Isles is a group of small isles located in the Merced River in Yosemite National Park, California, USA. They are located at the easternmost end of the Yosemite Valley floor where the slope of the Merced River changes from the much steeper upper main stem to the flat Valley floor. This scenic spot is the starting point for the Mist Trail, and is also the northern trailhead for the John Muir Trail that leads to popular destinations including, Vernal Falls and Half Dome. Trailhead Elevation: 4,000 feet (1,220 meters).

As noted in the book, Obata's Yosemite: 'Much of Obata's paintings have a distinctly pastoral feel. Bathed in soft light, scenes of walnut orchards in spring, or Suisun delta on a warm summer afternoon, have a profoundly calming effect on the viewer.

The color of water he used might be called "Obata blue," so frequently does it appear in his paintings. Obata looked to the Tosa School, whose artists he considered the finest colorists of Japan, for selecting and dissolving pigments. Following formulas some of which were more than a thousand years old, Obata ground his own paints from a variety of materials, including precious and semiprecious stones, flower petals, and oyster shells. For his blues, Obata ground lapis lazuli; for greens, he ground malachite, turquoise, or peacock stone. He is reputed to have used ruby dust for special reds - at a cost of seven hundred dollars for a tiny vial.