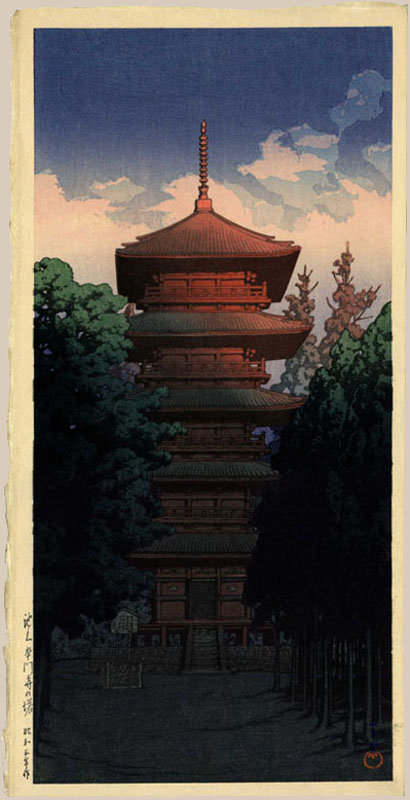 Notes: A first state example, with the S. Watanabe square "B" seal; lower right margin. A vertical naga-ban [long format print] temple scene. The lower stories of the pagoda and the surrounding cedars are covered in shadow, only the upper stories and finial of the pagoda are illuminated. This design was created during Hasui's 102-day touring trip.

"This print of Ikegami Honmonji, for example, is based on an actual sketch, it corresponds closely to the artist's original drawing. In fact, Hasui produced several prints of the temple, depicted at various times of the year and at different angles, which were based on his sketches. In this particular print, the gradation of color from the dark tonalities to the brighter sky attest to the diversity possible in the woodblock medium. Hasui has successfully created a mood fitting to the subject of the five-storied pagoda at this Buddhist temple of the Nichiren sect. Around this time Hasui began using a new seal; it was circular, and contained the kanji character kawa, with the enclosing circular lines a stylized form of the katakana character se. The square copyright seal reading hanken shoyu Watanabe Shozaburo ('possession of copyright, Watanabe Shozaburo') appeared on Hasui's works from around 1924 to 1930". - The New Wave; pg. 144-145

Provenance: The collection was initially purchased directly from the S. Watanabe print shop in the mid-1940's and has always been properly stored. The majority of prints showcase rarely seen MINT colors; several far exceeding numerous examples seen in prior collections.