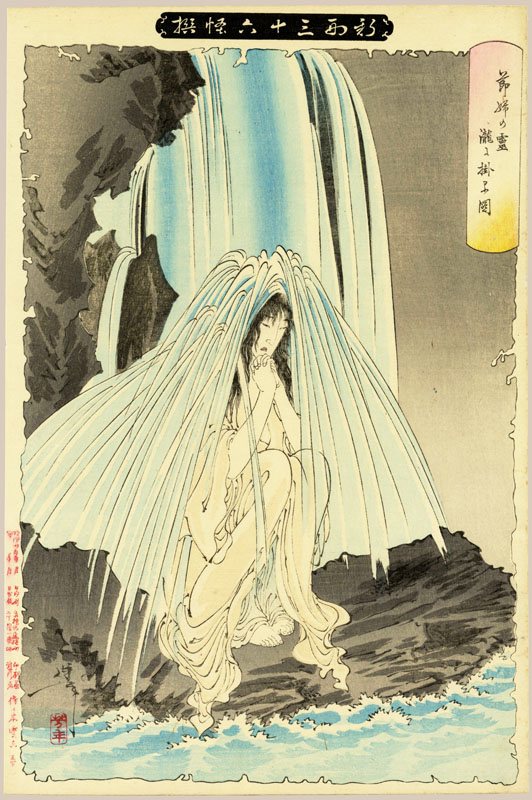 Notes: Embellished with mica on waterfall and embossing on cloth. A nurse prays under a waterfall for the safety of a boy. When she kills herself as a suing sacrifice, the child survives from captivity and will eventually take revenge for the death of his father.

Ghosts stories were popular in Japan. People liked to gather by candlelight and tell scary tales. When a legend was finished, one candle was blown out and the next person began.

When Yoshitoshi created 100 ghosts’ stories, he used this tradition. Twenty-six selected designs and a title page were published in 1865. First editions sold out immediately, because Yoshitoshi had become a famous artist by the end of his career.

The new forms of 36 ghosts were Yoshitoshi’s last important series. The woodblocks were made after Japanese and Chinese stories. Many pupils assisted him during the complicated preparation. Circa twelve blocks were carved per design and separately used for each color or special effect. The prints were published from 1889 until 1892.

The most important woodblock print artist of the Meiji period, Yoshitoshi was born in Edo (Tokyo) in 1839 with the given name of Yonejiro. The son of a merchant, samurai, Yoshitoshi left home permanently to live with his uncle, Tsukioka Sessai in Shinbashi. In 1850 his uncle enrolled him as a resident student in the school of Kuniyoshi (1798 -1861). He was given the artist name Yoshitoshi. His first print was published when he was 14, a triptych of a historical 12th C. naval battle. In the 1860, after the death of Kuniyoshi, Yoshitoshi supported himself by designing prints of the famous Kabuki actors of the day. By the mid-1860`s his prints depicted historical and heroic subjects. Against the difficult political background that was Edo between 1866 - 1868, Yoshitoshi produced a number of prints with intense, bloody subjects. In the years 1868-1869, a total of 240 designs were published and a newspaper ranked him as the fourth most popular woodblock print artist. He produced few prints between 1869 - 1871 and suffering a deep depression and nervous breakdown. During the 1870`s he designed prints for a Tokyo newspaper and struggled financially. The Satsuma Rebellion of 1877 led to his being commissioned to design a number of triptychs of the events. These were well received by the public and helped him temporarily escape his financial difficulties. Completed in 1880, Yoshitoshi`s series, "Mirror of Famous Generals of Japan", caused a sensation with their daring compositions, strong lines and vivid colors.

Between 1882 - 1886 he worked for three different newspapers. In 1883 the publisher Akiyama Buemon commissioned Yoshitoshi to develop his painting of Fujiwara no Yasuwase playing the flute into a triptych design. The print, published in 1883 is considered Yoshitoshi`s masterpiece. Buemon would later publish the "One Hundred Aspects of the Moon" series, beginning in 1885 and continuing over the next six years. Also in the 1880`s Yoshitoshi produced designs for 120 illustrated books, and after Kyosai, became the most influential book illustrator of the Meiji period. His most sensitive portrayal of women was depicted in "Thirty-Two Aspects of Costumes and Manners" published in 1888, in which he recalled the traditions of the past. In 1888, during the time he was moving to a new home in Nihonbashi, he was robbed, loosing many paintings, drawings and two thousand Yen, a very large sum at the time. This shock may have led to the artist`s renewed mental instability two years later. In 1889 he began working on the series, "Thirty-Six Ghosts" but was sick much of the time. Even with his poor health and failing eyesight, Yoshitoshi designed a group of superb triptychs which displayed his confidence and control of the medium. By 1891 he began to loose control of his mind and was admitted to several mental hospitals. Discharged from the hospital in May 1892, he moved to a rented lodging in Honjo where he remained until his death three weeks later.