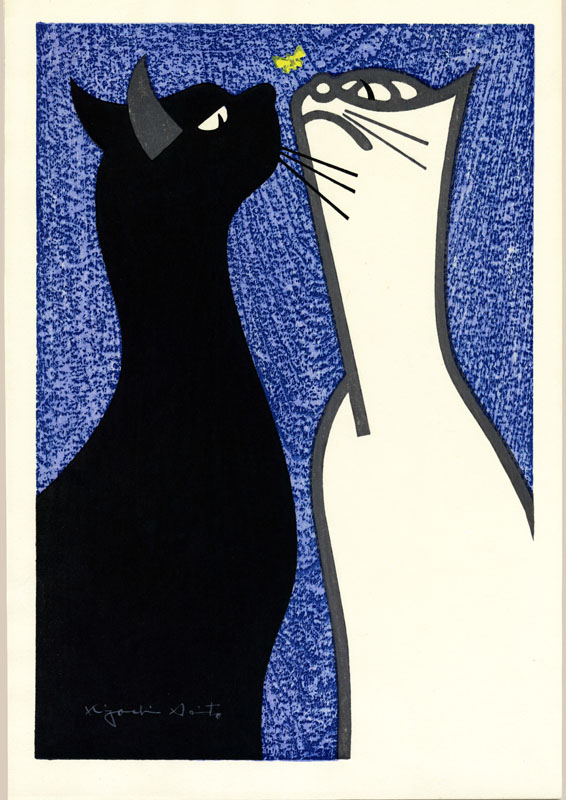 Notes: Removed from the original folder; never displayed or framed.

Born in Fukushima prefecture, Kiyoshi Saito began by designing signs for store fronts in 1924 and developed his work into a successful business. His love of art inspired him to sell his business and move to Tokyo in 1932. There he studied Western-style painting at the Hongo Painting Institute. While exhibiting his oils, he began making woodblock prints by cutting and printing progressively from a single block. By 1937 he focused solely on making woodblock prints and in 1938 he produced the Winter in Aizu series depicting the area where he lived as a child. In 1943, he met Onchi, which led to membership in the Nihon Hanga Kyokai (Japanese Woodblock Association). At the end of the war he exhibited with Un-ichi Hiratsuka and Hide Kawanishe in Tokyo. It was at this exhibition that he sold his first print.

In 1948, Saito exhibited at the Salon Printemps, and in 1951 received first prize for Steady Gaze at the inaugural Sao Paolo Bienniale. This event brought the modern school of Japanese prints to prominence. Saito was featured in Statler's, Modern Japanese Print: An Art Reborn (1956), and visited the U.S. in 1956 under the auspices of the State Department and the Asia Foundation. From that year onward, Saito exhibited widely throughout the U.S. and Europe. In 1967 he made a woodblock print of Prime Minister Eisaku Sato for the cover of Time Magazine.

Saito died in 1997 at the conclusion of a major retrospective in Tokyo at the Wako Department Store.