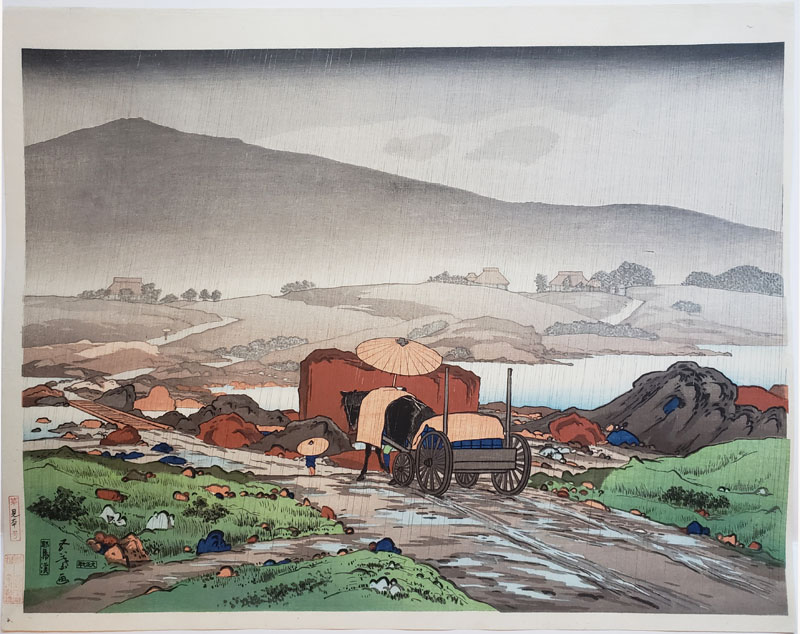 Hashiguchi Goyo, born in Kagoshima Pref., the son of a samurai and amateur painter, graduated in 1905 as the top student in the Western Painting department of the Tokyo School of Fine Arts. In 1911, he won first prize for an Ukiyo-e poster design contest sponsored by the Mitsukoshi Department Store. Although in poor health, he contributed articles on various Ukiyo-e studies to print magazines. He caught the eye of Watanabe Shozaburo who urged him to design prints for production by Watanabe. He designed a single print (Bathing) which Watanabe published in 1915, but decided thereafter to work on his own. A fine draftsman, many of his excellent figure studies drawn from live models are extant. Prior to his death he self published 13 prints, for a total of 14. After his death, his nephew Yasuo published seven new designs with blocks that he had inherited from his uncle.

Hashiguchi Goyo is one of the most celebrated shin-hanga artists, known for his stunning works of beautiful women or bijin-ga. His prints and designs were lavishly printed, often with the use of fine mica backgrounds. Goyo’s standards were so high that only prints of superior quality were sold. Due to Goyo’s exacting standards these prints were published in very small editions, usually less than eighty. They were expensive to create and were priced much higher than other shin hanga prints of the time. They are considered to be the most important bijin-e prints of the period.