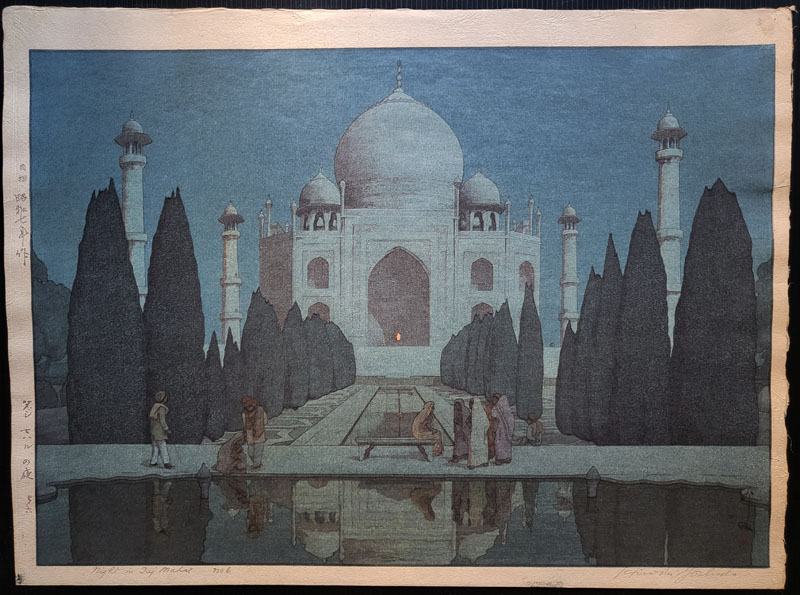 Notes: Signed in pencil by the artist. Brush signed and seal by the artist. In his 1939 book, Yoshida notes that 14 blocks and 51 impressions were used in order to achieve the 'bokashi' (shading).

Yoshida was apparently inspired by the work of the artist Charles Bartlett, who published woodblock prints of India with Watanabe Shozaburo in 1916. In November 1930, Yoshida and his son Toshi set sail from Kobe on Yoshida's fourth trip abroad, this time to India and Southwest Asia. Their grueling five-month schedule meant that they often journeyed on night trains to allow Yoshida ample time to sketch and paint during the day. The magnitude of attention he received from local residents would sometimes reach as many as two hundred people filling the streets to observe him at work. The artist would often be forced to ask the crowd to not block his view so that he could sketch the scenery before him. Hiroshi would lightly color sketches he made on any given day with an eye to their production as prints. This loosely grouped series is the artists largest, containing a total of thirty-two designs.

The primary purpose of Yoshida's India trip was to visit and sketch the Taj Mahal, and he apparently timed their arrival to be on the night of a full moon. Yoshida was so enamored by the white marble mausoleum commissioned by the Mughal emperor Shah Jahan in the mid-seventeenth century that he produced six different versions of the building, each numbered in their titles.