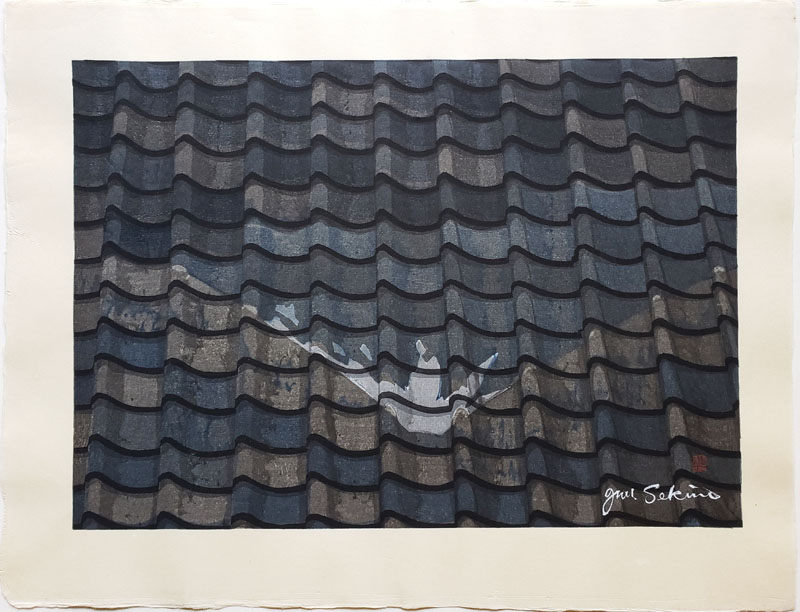 Notes: Signed and sealed in ink by the artist. Printer: Iwase Kōichi. The resulting work of Mount Fuji reflected by the light of the moon onto the tiled roof of a traditional Japanese home is a poetic image, expressed in geometric shape and simple color.

Hara (Moonlit Mt. Fuji Reflected on Tiled Roof) is a piece from this Fifty-three Stations of the Tokaido series, which Sekino continued to work on, producing a few pieces each year while also creating work to submit to exhibitions. In 1964, the year this piece was produced, he also created Numazu, Kuwana and Kameyama. Sekino tells the following story of the production: “Komai Tetsuro stormed into my room, with its painful, half-finished and failed work of Mount Fuji, and said, “Sekino, you have fallen to painting Mount Fuji too.” I guess that in his mind Fuji was just for low-grade commercial work, and that I was not in the position to paint it – so he was disappointed in me. ... Of course, I am not fond of the image of a dignified Mount Fuji spreading across a blue sky. In Hara, I doffed my cap before the beauty of Mount Fuji and went to my hotel room for a drink. In the night I woke up to go to the restroom. The pale moonlight was falling on the tiled roof, and over there, in a huge ultramarine sky, stood the bewitchingly beautiful mountain. It had to be a woodblock print. I had finally found a painting theme for Mount Fuji: reflected on a tiled roof. I was too excited to go back to sleep." - Sekino Junichiro, Kaido Koryo; Sekino Junichiro work and text collection, Bijustsu Shuppansha, 1983).

Hara post town, the thirteenth on the Tokaido, is where Numazu is in Shizuoka today. The name Hara refers to the former name of the wetland – “Ukishima-ga-Hara”, which was said to have the best view of the mighty Mount Fuji on the whole Tokaido, and which attracted many painters, such as Hiroshige Utagawa.