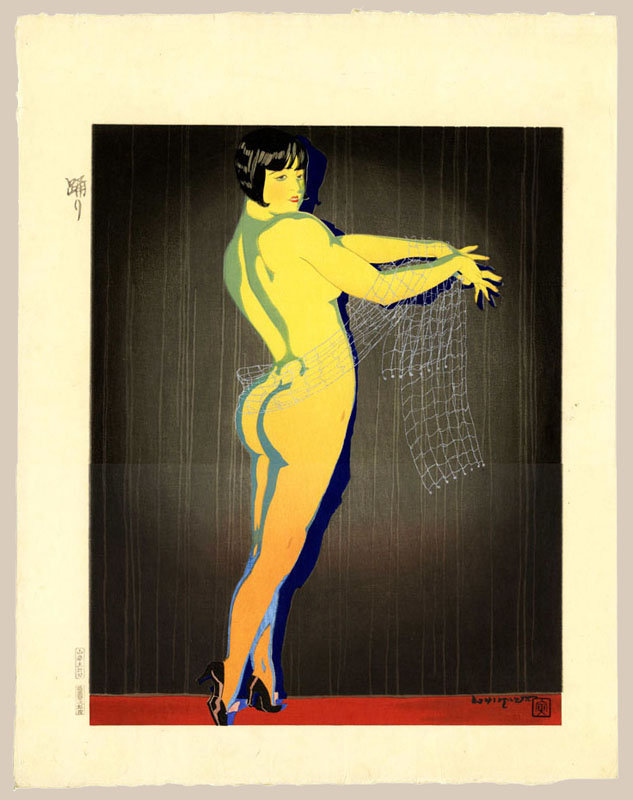 This series of nudes was controversial and it was reported that "some of the prints and at least two of the woodblocks were destroyed by the authorities." As a result, the Japanese government banned the series as part of a campaign for the National Spiritual Mobilization Movement (Kokumin Seishin sodoin Undo).

'Ichikawa Toraji presents the viewer with a clear example of French influence on twentieth-century, ukiyo-e inspired printmaking. Toraji, who studied in Paris in the 1910s, is best known for his series of 10 large dai-oban prints of nudes in strong colors'. - Ukiyo-e to Shin hanga; pg. 220

THE MOST SOUGHT AFTER IMAGE FROM THE SERIES. RARE IN THIS CONDITION.

A student of Koyama Shotaro, Toraji Ishikawa entered his paintings in several exhibitions of the Meiji Fine Arts Society. One of the founding members of the Taiheiyo Gakai in 1901, he traveled in Europe and the US in the early 1900's. He exhibited at the Panama-Pacific Exposition in San Francisco in 1915. Toraji received the Imperial Award of the Japan Art Academy in 1950. His prints include Inland Sea Landscapes (1930's) and the series "Ten Types of Female Nudes" (1934).