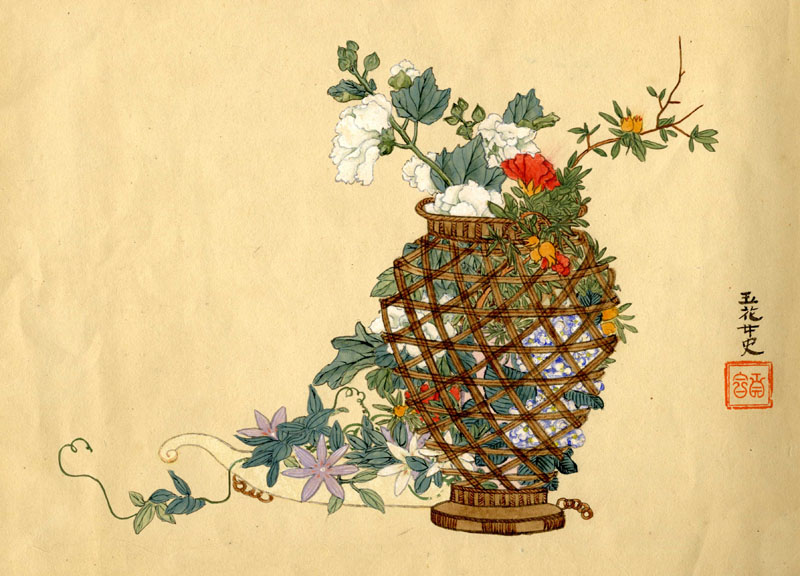 Notes: Completed at the age of 14 (1909), the set of four includes the earliest known works by Lilian Miller. This is the exact album of four flower paintings that propelled Miller's teacher, Shimada Bokusen to give her the artist name "Gyokka joshi" (Miss Jeweled Flower); as referenced in Brown catalogue: Pg. 14. Only a handful of known Miller works with the scarce early signature/artist name.

Ransford Miller's own passion for Japanese culture, encouraged a then nine year-old Lilian to enroll in the juku or private teaching atelier of Kano Tomonobu (1843-1912). Then in 1907, after several years with Tomonobu, the 12 year-old Miller entered the the teachings of the more progressive Shimada Bokusen (1867-1941). Miller's training preceded quickly and in late 1907 she exhibited a painting in the Imperial Salon at the Ueno Academy of Fine Arts. In March of 1909 Bokusen formally awarded her with the art name Gyokka (Jeweled Flower) in recognition of her artistic accomplishment demonstrated in an album, of four flower paintings. Rendered in ink and color, the four works are conservative in the extreme, exemplifying the rinmo (copying of established subjects and styles) central to formal artistic training and evaluation. - Brown.