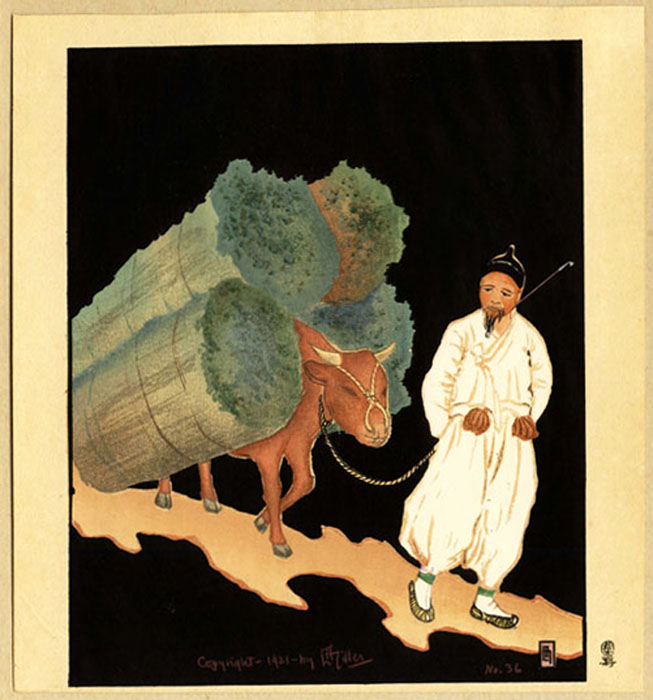 Notes: Still tipped to the original artist portfolio. This impression is offered in a complete original condition. In 1921, Miller began work on the series "People We Pass", featuring typical people of Korea, showcasing the brilliant coloring of the costumes to be intensified by a black background.

Lilian Miller wrote, "The Korean people live in houses with baked floors (gudeul). Under them run long flues, leading out from a primitive stone fireplace outside one end of the house to separate exits at the other, so whenever a fire is built the smoke makes its way through the various flues and heats the floor, giving the rooms a very comfortable temperature even on a cold day.

For fuel pine brush is usually used and it is a very common sight in the streets of any Korean town or village to see placid old bulls being led along almost completely hidden under huge piles of cut pine boughs. Cut on the neighboring hillsides, this brush is piled onto the patient animal and brought each day to the big brush market which is in every town. And every road is dotted with any number of moving masses of green and brown visibly supported on only four hoofs; but when the mass swings around in answer to some shouted imprecation of the white-robed peasant owner, you will catch a glimpse of the supernaturally solemn, patient, decorous old bull, sole support of his towering burden."