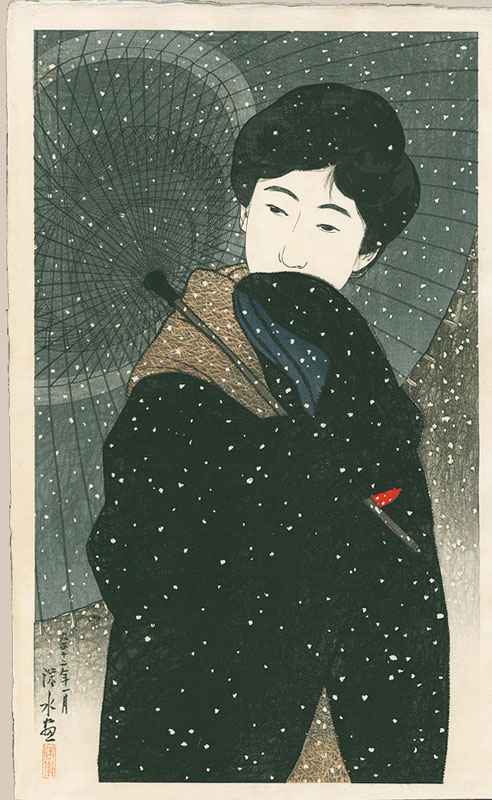 "Snowy Night" is part of the series, Twelve Forms of New Beauties, which was issued from June 1922 to early 1923. One print was published every month in editions of 200. As Shinsui's first series of the female image, its aim was, as the title suggests, to represent a new form of feminine beauty as advocated by the shin hanga movement, and by the artist's own ideals. His lyrical depictions of women were based on what he believed was the illustration of the essential realism of the female form. As he is known to have said during the critiques of his own students' work, "It is bad to just 'draw' the subject. Instead look carefully to bring out that which cannot be seen in the outer appearance of the figure".

This design is frequently praised as the representative work in the series. The steel-blue umbrella emphasizes the feel of a snowy wintry night. The shapes of the snowflakes are not applied, rather created through the white unprinted areas of the paper. In the woman's coiffure, Shinsui places softer black patterns suggesting highlights within the deeper black. This was achieved through two printings: first, a light black was laid down over the whole coiffure shape, then a second black was printed over all but the highlighted areas.

In the collection of numerous museums, including The Toledo Museum of Art; pl. 14, and Yamanashi Prefectural Museum of Art, pl. 39.