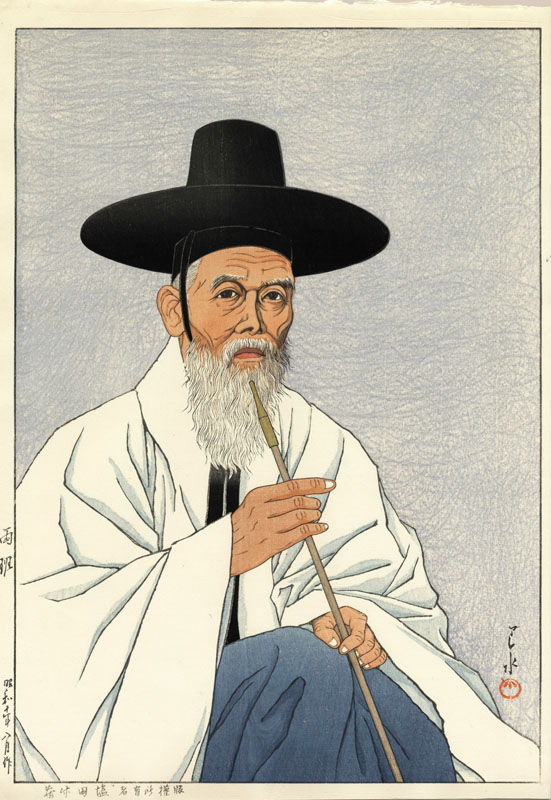 Yangban (literally, “two order”) were an elite class of civil and military government officials in Korea, principally during the Choson period (1392-1910). Yangban were exempt from obligatory labor or military duty, and were meant to devote themselves to an education in the Confucian classics and to advance according to the strictly organized examination system. The yangban class was endogamic, which meant they were prohibited from marrying and living together with non-yangban.

According to Paul Shiota, owner of T.Z. Shiota Gallery in San Francisco, Kawase Hasui (1883-1957) and the publisher Watanabe Shōzaburō (1885-1962) were commissioned by his grandfather, T.Z. Shiota (Takezō Shiota) of San Francisco, to produce a limited edition of only 300 impressions of this design. Approximately 200 of these prints are in circulation with the remainder being held by the Shiota family as of the year 2000. The print is an idealized portrait of a Korean gentleman-scholar created from a photograph. Takezō Shiota also commissioned another print from 1935 of the "Washington Monument" (Hotei #358) in the same limited format.

Takezō Shiota founded the T.Z. Shiota antique shop at 515 Grant Avenue in San Francisco in 1897. In April 1942 the Shiota family was ordered, under Franklin Roosevelt's Executive Order 9066, to relocate to the Poston internment camp in Yuma County in southwest Arizona. Takezō Shiota was to die in January 1944 at the Poston General Hospital.

Prior to the family's internment, T.Z. posted the following letter on March 26th, 1942 in his store window:

Time has come for us to say, "Au Revoir" after faithfully creating the world renown Chinatown by serving quality merchandise for 43 years. To you, San Franciscans and friend customers, the members of the firm of T.Z. SHIOTA, wish to acknowledge each and every one of you for your past patronage and cooperation. At this hour of evacuation when the innocents suffer with the bad, we bid you, dear friends of ours, with the words of beloved Shakespeare, "PARTING IS SUCH SWEET SORROW".
Till We Meet Again,
T.Z. Shiota