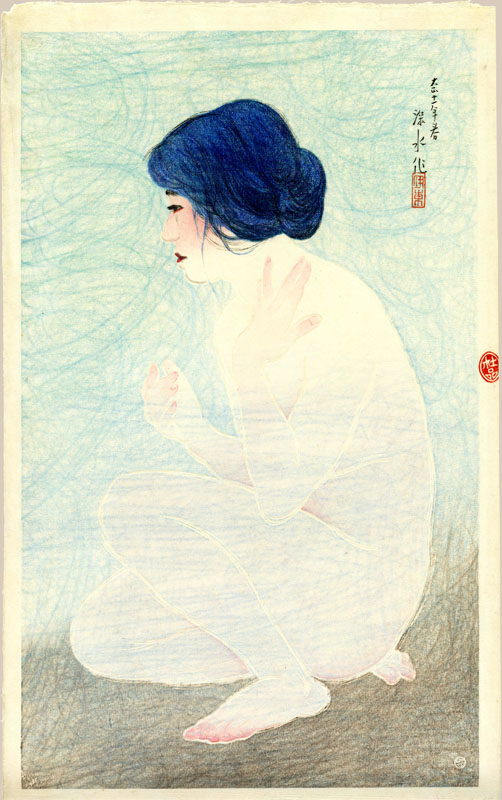 This design is part of the series, Twelve Forms of New Beauties, which was issued from June 1922 to early 1923. One print was published every month in editions of 200. As Shinsui's first series of the female image, its aim was, as the title suggests, to represent a new form of feminine beauty as advocated by the shin hanga movement, and by the artist's own ideals. His lyrical depictions of women were based on what he believed was the illustration of the essential realism of the female form. As he is known to have said during the critiques of his own students' work, "It is bad to just 'draw' the subject. Instead look carefully to bring out that which cannot be seen in the outer appearance of the figure".

"Bathing in Early Summer", is noteworthy as the only full-length nude in the entire print series. It is also unusual in the energetic application of the blue lines of the baren, not only on the background of the print, but also over the torso and hair of the female subject, which has added to the expressive quality of the print. Shinsui defined the contour lines of the figure through the use of blind-printing to create a more natural impression of a woman emerging from her bath. The printer used the baren to express the swirling lines in the background that are suggestive of heat and steam.

The original blocks and existing inventory were all destroyed in the aftermath of the 1923 earthquake and fires. The artists' works after 1924, rarely capture the tactile quality of his earlier designs, which can be seen quite clearly in the overall efforts taken in the 'baren' marks throughout the background. A thicker paper was also used by the S. Watanabe Color Print Co. for the pre-earthquake images.

Provenance: This example bears the distinctive seal of the celebrated Western collector James D. Tobin. Tobin assembled arguably the world's most important collection of 20th-century Japanese prints. It was dispersed in the 1980s, with a large portion of the collection entering many of the finest institutions.