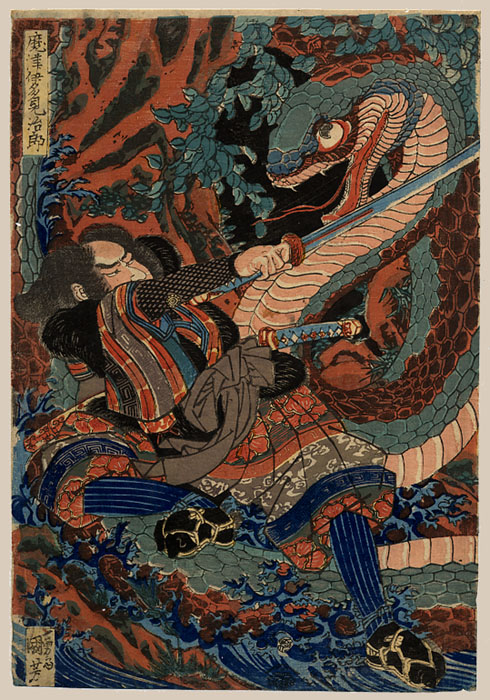 Notes: Matsui Tamijirô attacking a monstrous serpent in the mountains. As with the British Museum and Robinson copies of this print, there is minimal trimming on the bottom edge.

This work predates the Suikoden series, making it therefore a model for the great designs that were to follow. In this print, not a part of a series, we see all of the signifiers of his later great work. Tamijiro is here wrestling and slaying a gigantic snake of supernatural proportion; he thrusts with his sword, the figure lying taut across the page, arm outstretched. The unusual and dynamic composition forms a powerful conflict of diagonals between Tamijirô and the serpent. Kuniyoshi used this design almost exactly in the 1827 Suikoden series picturing Chusenko Teitokusen with the same snake.

Utagawa Kuniyoshi was a painter and Ukiyo-e printmaker who lived and worked in Edo. A student of Utagawa Toyokuni, Kuniyoshi founded his own style, which became so popular that he was often asked by men to tattoo his designs on their bodies. Kuniyoshi was particularly famous for his prints of actors, animals and illustrations of heroic episodes.