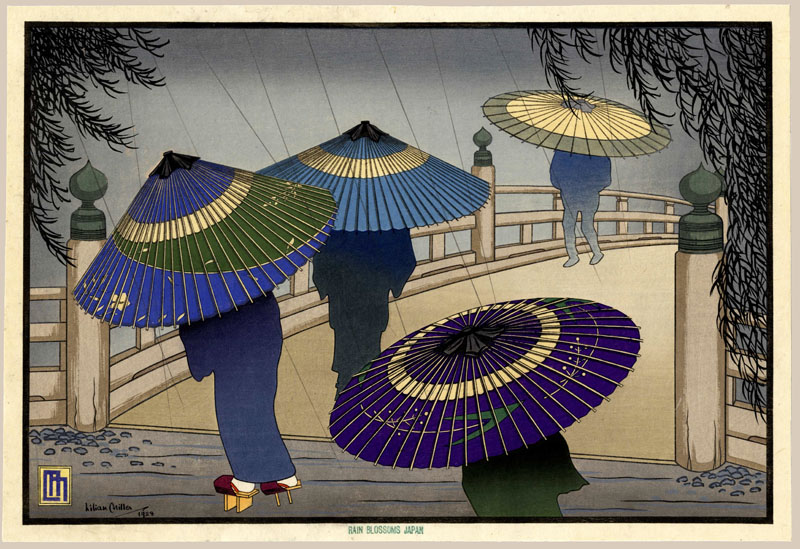 Notes: Illustrated as a two-page spread; inside back cover of the Kendall Brown catalog. The print reprises the umbrellas-in-the-rain theme from "Tokyo Coolie Boy" of 1920/1928. Miller similarly created two colors variants of this design, with "A" featuring a grey background and "B" using a brown tone. Despite the narrative appeal, Miller dramatically juxtaposes the naturalistic volume of the round umbrellas with the flatness of the silhouetted figures beneath them.

Brown notes that, "In preparing for her 1929-30 American tour, Miller arranged to have an article on her work published in the mid-October issue of Art Digest. For the article she chose Rain Blossoms, and provided this description:

'Though Japan is now in the seemingly inevitable transition from an oriental country to an up-to-date Western power, there are still to be found, both on the highways and byways of Nippon, many reminiscent touches of her ancient picturesqueness. Amongst these perhaps one of the most beautiful is the gay tinted oil paper umbrella that rich and poor, young and old alike, may be seen carrying on rainy days. These quaint round umbrellas are not only of many colors but of many patterns, an endless succession of designs of breath-taking charm; and cloudy, gloomy days in Japan take on a bright and lovely aspect when two or more of these umbrellas are glimpsed passing down a lane or crossing over an old native bridge, looking like veritable blossoms opening in the rain.'