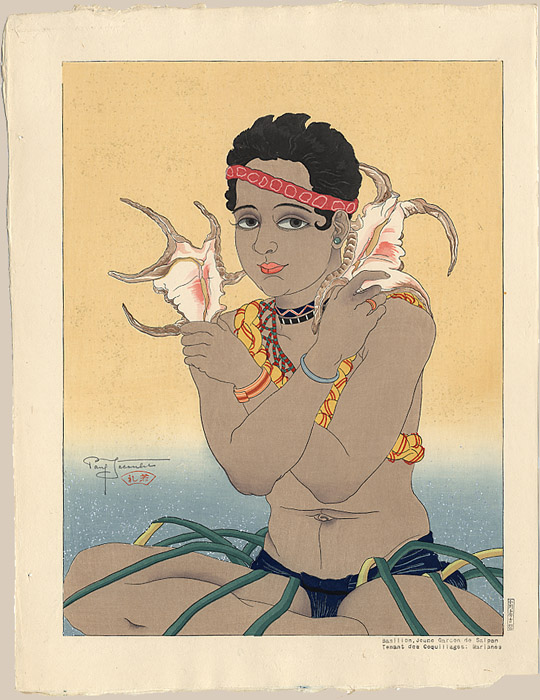 Notes: This print features flecks of gold and silver leaf in the background. Miles notes, this print is the first in which Jacoulet used his collection of seashells as part of the composition.

The South Seas prints were all created from sketches and paintings done between 1929 and 1936. As late as 1959, these early works were being carved to produce new prints. Since many were lost because of World War II bombing of Tokyo, several of them are among the rarest and most desirable of all the artist's oeuvre. - Miles, pg. 128

A POPULAR, EARLY DESIGN, RARE IN THIS CONDITION.

Born in Paris in 1896, Paul Jacoulet went to Japan with his parents in 1906. He showed a precocious artistic talent from an early age, starting to paint at just eleven and subsequently studying under Seiki Kuroda, Takeji Fujishima and Terukata Ikeda. He spoke fluent Japanese, French and English and mastered the violin and the Japanese samisen. He was also an avid butterfly collector with a collection which totaled 300,000 species at the time of his death.

He accepted a position with the French embassy in Tokyo in 1920, but frail health forced his resignation. He pursued his art full-time from 1921. In 1929, Jacoulet made the first of many trips to the South Seas, a region which was to inspire many of his future works. By 1934, he arranged for the fine artist and woodblock carver Kazuo Yamagishi to assist him in producing his first woodblock prints. Jacoulet, working with a succession of top carvers and printers, continued to act as his own publisher, exercising a high degree of control over the process and personally supervising the pulling of every print. Only prints for which he had subscription orders were printed, hence very few designs were printed in their full editions. Special hand-made and watermarked paper made in Kyoto, lavish use of gold, silver, platinum, mica, mother of pearl and powdered semi-precious stones, coupled with his use of as many as 300 different blocks for a single print, make Jacoulet's body of work unique.

In 1941, Jacoulet moved from Tokyo to the comparative safety of Kauizawa, where he continued to live and maintain his studio until his death in 1960.

Often dressed in a silk kimono, his face lightly coated with oshiroi ("honorable white") rice powder make-up and touches of color on his lips, Paul Jacoulet enjoyed greeting guests in his home and taking them to his studio to view his print production. Jacoulet became a favorite of post war westerners, who dubbed him the "Frenchman of the woodblock print". He took great pride in the fact that his prints hung in the offices and studies of the rich and famous - including General Douglas MacArthur, Pope Pius XII, President Truman, Greta Garbo and Queen Elizabeth II.

This eccentric and imaginative genius, whose prints ranged in subject from the most aristocratic exoticism to spare studies of the simplest of people, provided a unique contribution to twentieth century art.