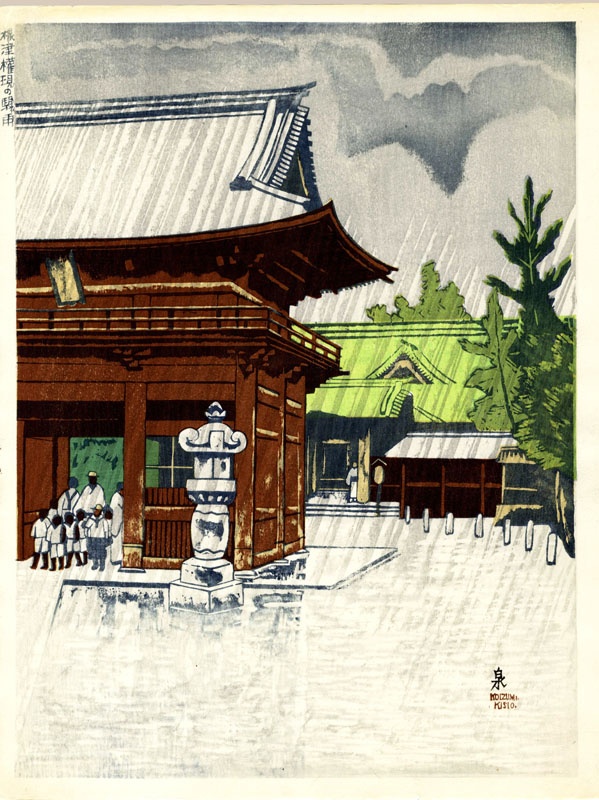 Notes: A heavy rain shower at the entrance of the Nezu Gongen temple. The series, "100 Views of Great Tokyo in the Showa Era" depicts the new land marks and people's lives in Tokyo after the devastating Great Kanto Earthquake in 1923. It was started in 1928 and finished 12 years later.

In 1893, Kishio Koizumi was born into a large family located in Shizuoka, a large city in Honshu's southern coast. His father was a master calligrapher who had served the Tokugawa shogunal family. At a young age, Kishio displayed a strong talent for drawing, and at sixteen he was sent to the Western-style art school, the Japan Watercolor Academy in Tokyo. It was founded in 1907 by the painters Oshita Tojiro, Ishii Hakutei and Tobari Kogan. Both Hakutei and Kogan would eventually be instrumental in the development of the woodblock print movement in that period.

In 1928, Koizumi released the first print of this ambitious series of 100 designs. Entirely self-carved and self-printed, the series would take nine years to complete during a period of rapid expanding and rebuilding of Tokyo and tumultuous political and social change in Japan. Koizumi's views of Tokyo reflected an interest in the modernization of the city while at the same time a sense of nostalgic pride in traditional Japan. Indeed, to produce a series depicting locations in the capital is a direct reference to the Edo period convention of scenic views made popular by artists such as Utagawa Hiroshige (1797-1858). Koizumi also chose subjects such as the army barracks or the Meiji memorial which were symbolic of Japanese Imperial achievements or locations that endured the 1923 Great Kanto Earthquake, to display strength and resilience.

Throughout his career, Koizumi remained very active in carving and printing his own works which were primarily landscapes, as well as that of other artists. He had produced 23 designs for his series, Thirty-Six Views of Mt. Fuji when he passed away unexpectedly in 1945 after evacuating from Tokyo during the war.