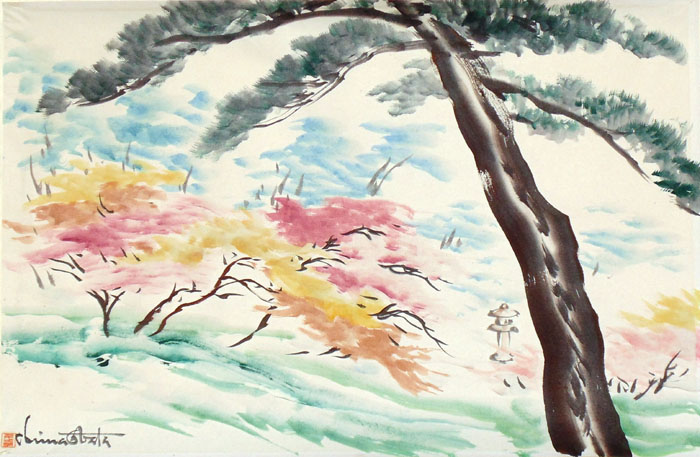 Notes: Faint matte line at the outside edges of the painting. Signed and sealed by the artist in the lower left corner.

Following formulas some of which were more than a thousand years old, Obata ground his own paints from a variety of materials, including precious and semiprecious stones, flower petals, and oyster shells. For his blues, Obata ground lapis lazuli; for greens, he ground malachite, turquoise, or peacock stone. He is reputed to have used ruby dust for special reds - at a cost of seven hundred dollars for a tiny vial.

Obata was one of most prominent practitioners of the modern nihonga (Japanese Painting) movement, which sought to reconcile traditional Japanese and contemporary European schools of art. As a professor of art (1932–1942/1945–1954) for the University of California at Berkeley, Obata taught thousands of students about Asian culture and Buddhist philosophies of respect for nature, selflessness, and pacifism. The East West Art Society, co-founded by Obata in 1921, promoted his belief that art could provide the common ground necessary to transcend the barriers of nationalism and racism. For Obata, “Great Nature” provided important philosophical lessons regarding permanence and impermanence, and also served as a source of spiritual enlightenment. Although he never practiced any organized religion, Obata observed, “when I enter into the bosom of Great Nature I believe in the blessing of nature as a kind of God to me.”