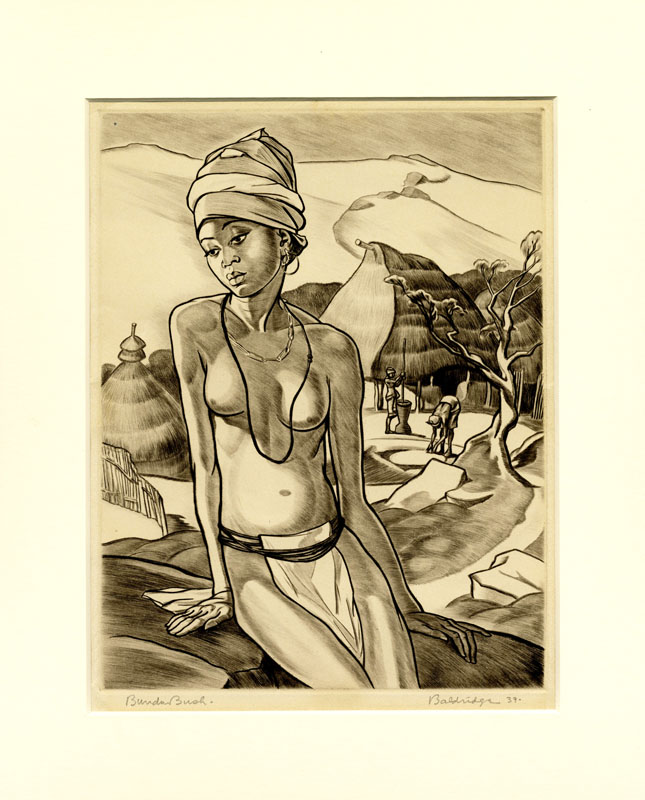 Notes: Pencil signed, titled and dated by the artist.

Beginning in 1920 Baldridge and his companion Caroline Singer decided to embark on a trip throughout the African continent and into Asia, beginning with Sierra Leone and across to Ethiopia, India, China, and Japan. These visits became a great source of inspiration to Baldridge, who sketched the people and places they met and ventured through. When the pair returned to the United States, Baldridge began seeking out African American thinkers and artists, and was commissioned to illustrate the works of some of the Black writers he came to know. He and Singer published several books about their travels and Baldridge's activism expanded to vocally protest mounting sentiments of race inferiority as Europe barreled toward a second world war.

Their travel was not tourism but was designed to help comprehend the great questions of the world. To understand better the background of blacks in America, they moved, mostly on foot, across Africa from Sierra Leone to Ethiopia. Along the way they lived in native villages where Baldridge sketched and communicated with the Africans through pictures. They traveled light, he in a golf cap and she in anything comfortable. No pith helmets, no guns, never asking or accepting the special treatment demanded by other members of their race. In India, they never saw the Taj Mahal, but they met Rabindranath Tagore and participated in dark-of-night meetings with Gandhian nationalists.

From this African journey came a marvelous book, written by Caroline Singer and lavishly illustrated by Baldridge, White Africans and Black. It is an elegant and respectful portrayal of black African culture written at a time when whites hardly even acknowledged its existence. The experience left them deeply committed to the rights of black Americans. Baldridge frequently worked for Opportunity, a journal of the Urban League, and he beautifully illustrated several books by African American authors. After his African adventure he convinced Samuel Insull to donate hundreds of his splendid sketches to Fisk University. Upon their acquisition, Charles S. Johnson, a prominent sociologist who was later to become president of Fisk, said, "The Baldridge Collection represents the best representation available of African Life."[9] Having seen the world and its people at close hand, Baldridge was intense in his refusal to work with any author who portrayed another race as inferior or foolish.