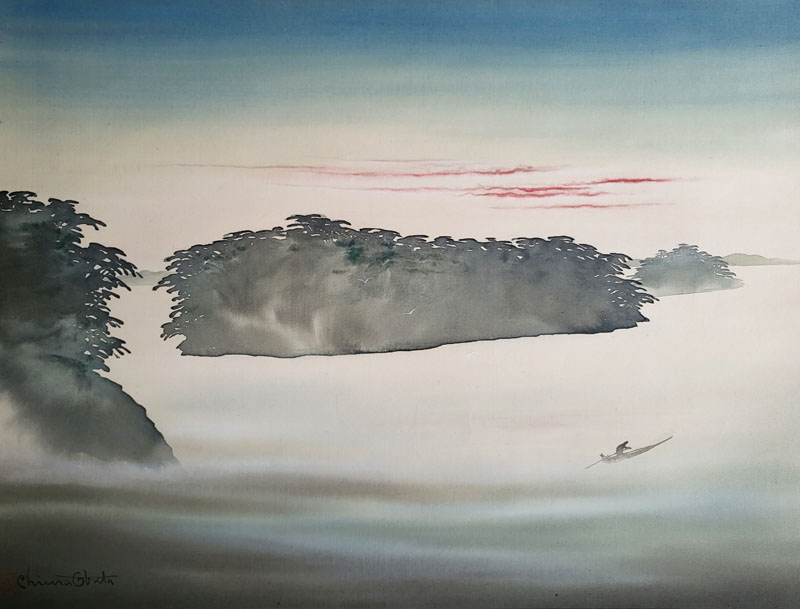 Notes: A near mint original painting, displaying superb colors throughout. Signed and sealed by the artist. Complete; with the original presentation box.

In this work, Obata is able to capture the elegant beauty of the surrounding area of Matsushima Bay. A scarce subject matter for the artist; as is other locations within Japan. Obata organized tours to Japan beginning in 1953, and it is likely that he visited the park with tour members and painted a sketch of this work at the site.

For his important paintings on silk, Chiura Obata used pigmentation ground from natural gemstones. The undiminished vibrancy of the blues and greens presented by this painting is ample testament to the resulting quality of his efforts. The subtle, almost pointillist, brushstrokes of the foliage in the foreground are captivating, comprising in and of themselves a compelling painting. The tree in the foreground on the right towers two feet in height - a wonderful painting within a painting that somehow integrates masterfully with the entire image.

The color of water he used might be called "Obata blue," so frequently does it appear in his paintings. Obata looked to the Tosa School, whose artists he considered the finest colorists of Japan, for selecting and dissolving pigments. Following formulas some of which were more than a thousand years old, Obata ground his own paints from a variety of materials, including precious and semiprecious stones, flower petals, and oyster shells. For his blues, Obata ground lapis lazuli; for greens, he ground malachite, turquoise, or peacock stone. He is reputed to have used ruby dust for special reds - at a cost of seven hundred dollars for a tiny vial.