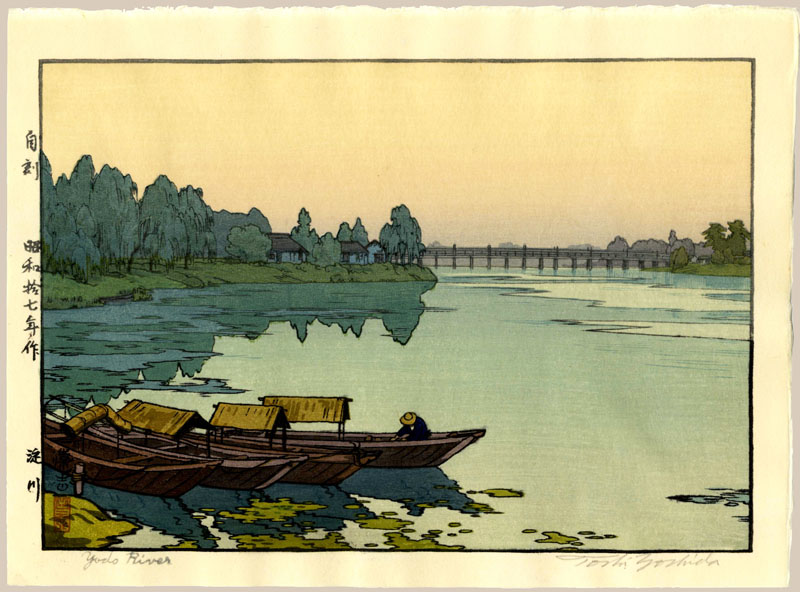 Notes: Pencil signed by the artist.

Born in Tokyo in 1911, Toshi Yoshida was the eldest son of Hiroshi Yoshida. Under his father's influence, Toshi began to learn painting at age 3 and woodblock printing at age 13. From 1925-1929 he studied oil painting at Taiheiyo Art School and in 1929 traveled with his father to India and Southeast Asia. In 1936 Toshi journeyed to China and Korea. In the early 1950's, he visited the US and Europe where he exhibited works and lectured about woodblock prints. In 1954 he taught printmaking for one month at the Art Institute of Chicago and since that time has often traveled to the US, Canada, Mexico, Africa, Australia and Antarctica for sketching, exhibitions and lectures. For a few years after the war, he made prints of abstract subjects, but then reverted to prints of scenery and animals. In 1980, Toshi opened the Miasa Cultural Center in Nagano Prefecture where he taught students from many countries, including Carol Jessen and Karyn Young.

Toshi Yoshida's work is in the collections of the Museum of Modern Art, New York; British Museum, London; Paris National Library, Seattle Museum of Art and the Krakow National Museum.